Secondary school, a sabbatical, and a calling.

My first year at University, studying architecture. My number was not pulled out of the barrel, so I was not conscripted and sent to Vietnam. It was a good life.

To celebrate my matriculation, my parents gave me a typewriter. I taught myself to type. Should I be an architect, or a social worker?

I helped edit, photograph and design the school magazine, printed letterpress. (Even now, when I pass the old Truth newspaper building, I recall the acrid smell of etching the halftone blocks).

I had a short tour of Germany, Italy and France with my father. Seeing a lot of Modern architecture and design made a big impression. So did contact with fine cars and wonderful civic places.

With my family I travelled to England for a year's sabbatical leave, on board the SS Orcades.

I swotted hard and passed the Queensland Junior Public Examination. English and Physics were my best subjects.

My first adjustable camera was a 35mm half-frame Olympus Pen. I blacked out the bathroom window to make a darkroom.

As a Boy Scout I learned to make custard on a camp fire. 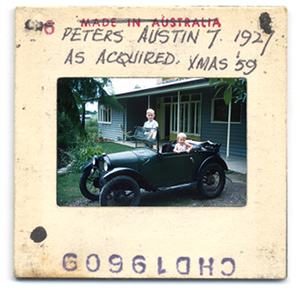