This marvelous structure, which I have admired elsewhere, was written up in the journal Engineering (16 March 1866, page 159). I thought it worthwhile to get a copy of the article and make it available here in digital form. 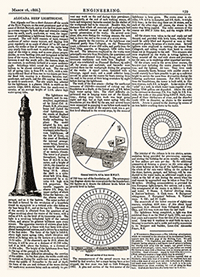 Below is the full text of the article, transcribed as faithfully as I could manage, with illustrations scanned from a photocopy obtained by the Queensland State Library:

THE Alguada reef lies a short distance off the mouth of the River Negrais, on the most prominent part of the coast of British Burmah, and as it is the first point made on oversea voyages by both ships and steamers coming from the north, south, south-east, or west the importance of establishing a lighthouse there cannot well be overrated. The reef itself consists of hard, compact sandstone of rather coarse texture, and dipping with great regularity at an angle of about 45° to 39° east of south, the strike or line of outcrop of the rocks being very nearly from north-east to south-west. The west slope of the ridge is steep, and in some places perpendicular, or even beetling over, and is exposed to the full force of the waves, there being nothing to stop the sea between it and the south pole; the eastern slope on the contrary, is uniformly inclined at a more moderate angle. Soundings taken round the reef showed the bottom to be almost entirely of rock. The rise and fall of spring tides is from 9 ft. to 12 ft. with a velocity in ebb and flood of from one to two knots per hour, the flood tide running in a direction between east, south-east, and south, and the ebb varying from west by north to south-west. The site which was selected for the lighthouse is a plateau 100 ft. in width on the eastern ridge, 600 ft. distant from lhe south-west extremity, at an average height of 1.1 ft. above high water spring tides.

The lighthouse was designed, and its construction superintended by Lieut.-Col. A. Fraser, R.E., who came home and visited the chief lighthouses on the coasts of En­gland and Scotland before finally submittiug his plans. The model adopted by him, and upon which his design was based, is the Skerryvore Lighthouse, off the Isle of Tyree, on the coast of Scotland, the internal arrangements being, however, necessarily altered to suit the re­quire­ments of an eastern climate. The tower is of granite throughout, having a base of 42.5 ft. in di­am­e­ter, and a height of 120 ft., the diameter at the top of the column being 16 ft. Above the shaft is a cylindrical belt 18 in. deep, sur­mounted by a cavetto 6 ft. high with 3ft. projection. The cavetto supports an abacus 3 ft. deep, the upper surface of which forms the balcony; on the abacus rests the parapet, and on it the lantern. The outer surface of the shaft is formed by the revolution of a hyperbola round its asymptote as a vertical axis — the radius at the base being 21 ft., and at the top 8 ft. The contour of the cavetto is obtained from the quadrant of an ellipse revolving about the centre of the tower, with a radius of 8 ft. on the level of its transverse axis. The light is a revolving holophotal light of the natural colour, and attains its greatest brilliance once every minute. The apparatus consists of sixteen glass holophotes arranged in a frame with four faces with silver plated hemi­spheri­cal mirrors, and is driven by a machine of the first order. The focus of the light is 143.6 ft. above high water spring tides, which elevation will admit of its being seen on the horizon at distance of 15.85 miles. If the observer’s eye be 20 ft. above the horizon, it will be seen at a distance of 21.766 miles, and if at 50 ft. above the horizon, at a distance of 25.304 miles. The height of the lighthouse from base to the top of the parapet is 144.25 ft.

There were many difficulties attending the erection of this edifice. In the first place, the works could only be carried on during the north-east monsoon, or from about the middle of November to the end of April, the force of the sea and violence of the waves during the south-west monsoon being such as entirely to prevent any work on the reef during their prev­a­lence; consequently, at the end of each working season, all tools and temporary barracks erected for the shelter of the work­people had to be removed. Besides this, the distance from which all materials and work­people had to be collected caused no small hindrance to the speedy prosecution of the works. On several occasions, also, even during the working seasons, the men had to leave the reef in the event of a severe storm.

The granite for the erection of the lighthouse was obtained partly from Callagouk, on the Tenasserim coast, a distance of over 200 miles, and partly from the Pulo Obin quarries, at Singapoor, 1200 miles from the reef. The labourers employed on the works were principally convicts from Moulmein, the quarrymen and masons were obtained from Hong Kong, and all the necessary machinery and tools from England. A depôt was established on Diamond Harbour, 4½ miles off, for stores and materials, and barracks were erected there for the work­people during the progress of the works. A signal tower, fur­nished with a telescope, signal mast, and a small reflector lamp, served to point out the course for boats coming from the reef, in the event of their being overtaken by night before leaving the lighthouse. 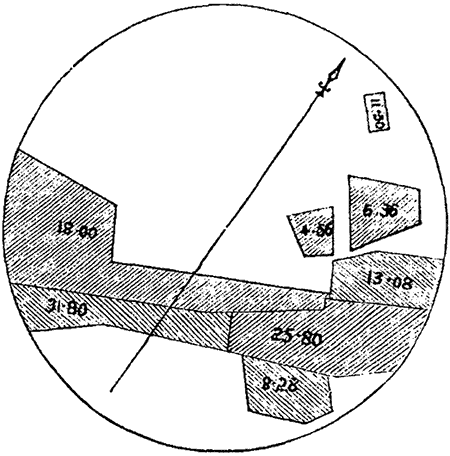 The work of the first season — during the north-east monsoon of 1859-60 — consisted of cutting out the foundation to a depth, at the lowest part, of 8 ft. below high water spring tides. The chief difficulty experienced was in keeping water out of the foun­da­tions; during neap tides work was kept going night and day, but at high water spring tides the foundation pit was filled by the sea, and several hours were consumed in pumping it out before work could be resumed. The result, of the season’s work was a perfect level obtained in the several steps, by the removal of 700 tons out of the foundationpit. The accompanying di­a­gram shows the excavatious for the foundations; the figures on it denote the different levels below the general level in inches. 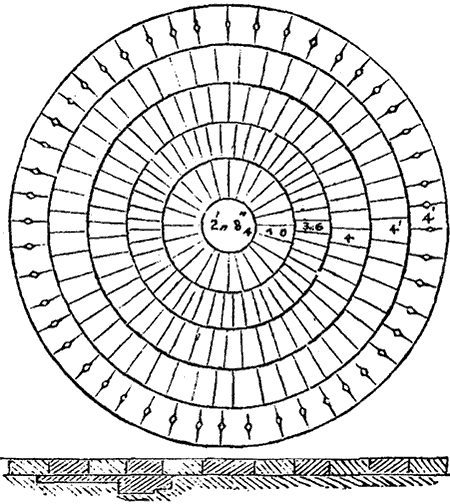 Plan and section of first course.

The commencement of the second season was retarded by foul weather, but a crane having been at last stepped, the first stone was laid on 14th February, 1861. A plan and section of the first course of the lighthouse is here given. The centre stone is cir­cu­lar, 5 ft. 4 in. in diameter, and 2 ft. thick; it weighs 3.85 tons; in the first ring there are 24 stones, and in each of the other rings 48 stones, the stones in the outer ring being joggled. The cubic contents of this course are 3097.2 cubic feet, and the weight 229.45 tons.

All the stones were taken to the reef ready cut and dressed, and provided with lewis holes, whereby they could be safely lifted and deposited at once in their respective places, by means of a centre crane. Several lighters were employed in carrying the stones from Callagouk, and sailing vessels were hired to convey those cut at Singapore to the reef. Two steamers also were employed on the works in towing lighters, or being moored off the reef with stores and provisions for the men, or in rendering other important services.

Of the stones used in the seven lower courses, the heaviest (not including the centre stones), was 1.93 tons, and the lightest, .53 tons. They were made thus unusually heavy, because with smaller stones it would scarcely have heen possible to get up a sufficient height to secure the mass from destruction during the following south-west monsoon. For 26 ft. in height from the foundations, the tower is built solid, in thirteen courses, each 2 ft. in height. In the centre of the “solid” is a well, in which water tanks capable of containing 1700 gallons are deposited. Above the solid is the entrance or doorway, 7 ft. 6 in. high, by 3 ft. 6 in. wide, the walls at this point being 9.087 ft. thick, composed of three thicknesses of stone, and the chamber inside 12 ft. in diameter, as shown in the annexed sketch. Access is gained to the dooway by means of an iron ladder reaching down to the rocks. 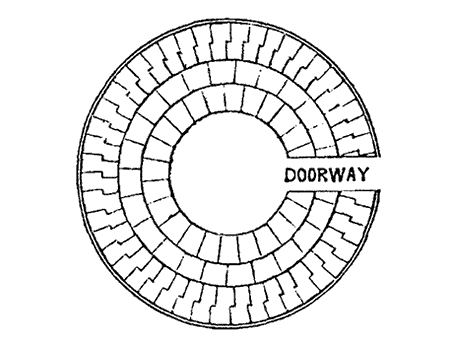 The interior of the column is in ten stories, accommodation being provided for provisioning, watering, and storing the building for seven months, with water at four gallons per man per day. By the additional precaution of forming a groove on the outer edge of the stone balcony at the top of the lighthouse, so that the whole of the rain water falling on the surface of the dome, lantern, parapet, and balcony, will be conducted to the water tanks, an additional supply is provided, as the fall of rain during the season when the reef cannot be approached may be taken at from 70 to 80 inches. Dwelling accommodation is provided for two European light-keepers, five natives, and a cook. The arrangement of the rooms is as follows: 1. Fuel and water. 2. Stores. 3. Natives’ dwelling room. 4. Natives’ bed­room. 5. Cook room. 6. Europeans’ sitting-room. 7. Europeans’ bedroom. 8. Visitors’ room. 9. Oil; and 10. Light.

The stonework of the tower consists of eighty-one courses, weighing 4250 tons; of this about equal quantities were ob­tained from Callagouk and Pulo Obin, and 115 tons were cut from the reef itself.

The lighthouse being completed, a light was first exhihited from it on the 23rd of April, 1865, not quite four years and a quarter from the date of its commencement. Long may it continue to send forth its rays, a blessing to mariners, aud a noble and worthy monument to its designer and builder, Lieut.-Col. Alexander Fraser, R.E.

Back to other stuff