Back in the year two thousand and two, when I started to take a more serious interest in the few old photographs I owned, I up­loaded a web gal­lery of cartes-de-visite by Queensland pho­to­graphers. By early 2003 there were 18 photographs on display there, representing the work of ten studios. 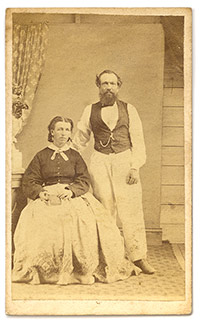 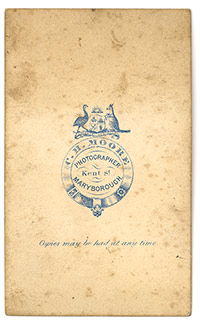 Portrait of an unidentified couple​—​front and back of a carte-de-visite by C H Moore, Kent Street, Maryborough, Queensland.

I have just uploaded this carte-de-visite by C H Moore. It is the 120th item added to the gallery, so I’ll mark the occasion by giv­ing it special at­ten­tion here. Like all of these little pictures it has more than one story behind it.

When I began this project my essential reference was Alan Davies’ and Peter Stanbury’s book The mechanical eye in Aus­tralia: photography 1841-1900 (Melbourne: Oxford University Press, 1985). The book includes a detailed list, with dates and places, of professional pho­to­graphers who worked in Australia before 1900, and amateurs before 1880. The list was compiled by researchers who extracted much of the information from historical newspapers on microfilm.

Since the National Library of Australia’s wonderful Trove di­git­ised newspapers project came online I have been able to do my own newspaper research, in a less-tedious way, and without leaving my desk. 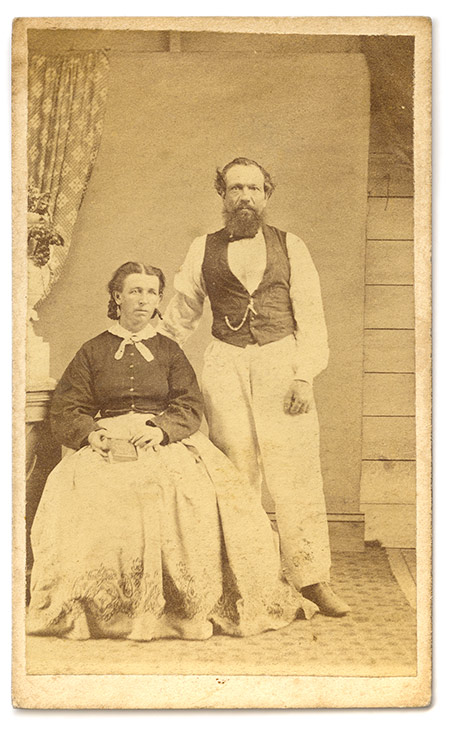 The front of the carte-de-visite.

In C H Moore’s photograph the two subjects are well dressed and carefully posed in a conventional arrangement. The image is sharply focussed, there is no sign of movement blur, head-clamps (if they were used) have been skillfully hidden, and the drapery on the left is an attempt to signify a certain style. But an error in aiming the camera has cropped off the stylish curtain, and re­vealed that the picture was probably shot on a verandah dressed up with a backdrop and a piece of linoleum. I im­me­di­ately guess that this is the work of an itinerant photographer who carted his equipment from place to place, rather than doing steady business in a well-set-up studio. C H Moore’s entry in The mechanical eye has travelling photographer at the bottom, which fits.

A quick search of Queensland newspapers, via Trove, told me more about Christopher Hume Moore’s practice as a pho­to­grapher. He comes across as an energetic fellow who was willing to adapt and to follow opportunities​—​important qualities for a photographer in Queen Victoria’s time.

Moore’s name first shows up in the Maryborough Chronicle, Wide Bay and Burnett Adver­tiser of 18 May 1867, where he ad­vert­ised that he had bought the photographic business of Ash­bury Bright​—​a business that had operated in Maryborough for the previous four years.

On 11 September 1867 the Chronicle included this advertorial piece:

Our Photographic Artist, Mr Moore, has lately made several additions to the apparatus of his studio; amongst other things a very large camera for taking large portraits and views. Yesterday we had the pleasure of seeing some specimens of the production of this new instrument, amongst others of a view of the Commercial Bank, which is admirably taken, as they all are​—​the picture being sharp and clearly defined, and artisticallv placed with a view to effect. We recommend persons who wish to perpetuate the flitting image of themselves, or of their abodes as they appear to-day, to avail themselves of the aid which Mr Moore proffers them.

In January 1868 Moore ran big advertisements in the Chronicle urging readers to come to his studio to have their portraits taken without delay, since he was planning to be away for two months taking photographs around the gold diggings. By early February he had engaged another photographer and was offering pho­to­graphic services in Nashville (the place we now call Gympie) as well as in Maryborough.

Perhaps he over-extended himself, and ran into cash-flow problems​—​still a pitfall for expanding small businesses. The Gympie Times and Mary River Mining Gazette of 20 Feb­ru­ary 1869 printed this:

A deed of composition has been re­gistered, whereby C H Moore, Photographic artist of Mary­bor­ough, covenants to pay his creditors two instalments in the £ the first forth­with, and the second on the 23rd July.

Things were going better for him in September 1869 when the governor of Queensland, Colonel Sir Samuel Blackall, while on a visit to Maryborough, stopped at Moore’s studio to be pho­to­graphed. A few days later the photo­grapher advertised veritable portraits of His Excellency the Governor at a shilling each for cartes-de-visite, two shillings and sixpence for whole plate prints, and seven shillings and sixpence for prints Mounted in hand­somely polished Cedar Frames.

Perhaps the story of Governor Blackall’s visit to Moore’s studio in Mary­bor­ough, jotted in a researcher’s notes, was mis­in­ter­preted and turned into the statement in The mechanical eye that Moore was based at Blackall (the town) in 1869. I could not find any mention of Moore in the Blackall district in the con­tem­por­ary newspapers that are searchable in Trove.

It appears that Christopher Moore maintained a connection with Ashbury Bright, from whom he bought the photographic busi­ness in Maryborough. The Chronicle carried this advertorial piece on 17 September 1868:

Our photographist, Mr Moore, has purchased of Mr A Bright his splendid set of negatives of views taken on the several stations of the Wide Bay and Burnett. Having also taken some very fine views himself, Mr Moore intends pub­lish­ing a set of photo­graphs of scenes in town and country, which may be bound in albums or kept in port­fo­lios, and which will form one of the most appropriate and handsome presents that could be made by anyone living in the district to a distant friend. Mr Moore ought to be well patronised, and we hope will be, for his enter­prise and skill.

The Chronicle of 28 December 1871 reported news from the town of Gayndah, including this:

Messrs Moore and Harris, photographers, from Mary­bor­ough, have arrived in town, and have taken up their quar­ters at the Gayndah Hotel. Mr Moore is well known in Gayndah, and well liked, and it is hoped that he and his partner will do as well as Mr Moore did on his previous visit to us. They visit Mount Perry before returning to Maryborough.

In April 1872 C H Moore had been in Mount Perry, the site of a newly-established copper mine and smelter, as the Chronicle reported:

We have seen some very pretty views of Mount Perry and its neighbourhood, taken by Mr C H Moore, photographer, late of this town. They convey a most pleasing idea of the romantic scenery of that locality, which from all we can learn, abounds in attractions to the lover of the pic­tur­esque. The representations of the township, smelting works, &c., in their present primitive condition, are, per­haps, not equally gratifying to the eye, but they are in­ter­est­ing as il­lus­tra­tions of the rude beginnings from which an interest of vast magnitude is even now springing, and will, in years to come possess an historical value which will always secure for them a brisk demand.

In the same article it was mentioned that Thomas Mathewson, Photographic Artist, was coming to Maryborough to take portraits. Photography was a competitive business.

Small advertisements in the Chronicle in December 1874 announced that C H Moore had taken over the studio in Kent Street, Maryborough, lately occupied by Mr E H Forster. In the same paper, Forster ran larger advertisements announcing his new premises in Adelaide Street.

It is with deep regret that we have to report the sudden death of Mr C H Moore, the photographer. Friday morning he was in the enjoyment of his usual health, and embanked on board the steamer Effie with a number of excursionists to attend the tea-meeting at the Mary River Saw-mills. While going up the river he complained of being unwell, and mentioned that he believed that one of his bilious attacks’ was coming on. Shortly after complaining he be­came worse, and had to lie down. He had lost all con­scious­ness before he reached the landing place. It is not pleasant to record that the invalid was carried to a house to which he was refused admittance, the charitable inmate fearing lest the sick man should bring infection with him. Finally the residence of a good Samaritan was found, and here poor Moore for a while found shelter. However, he never rallied. He was conveyed back to town by the steamer, and died at about seven o’clock the same evening. Death doubt­less resulted from heart disease, from which the deceased had long been a sufferer He was only 30 years of age, and leaves a wife and four young children entirely unprovided for.

In November 1875 the Chronicle included an invitation to an amateur concert in aid of C H Moore’s widow and family, and a series of advertisements for his photographic equipment and stock.

comment on this article by private email
< previous  |  next >